The face can/must  be considered as a puzzle

Lucien De COSTER ( belgian orthodontiste) used to say : " the precise reports, binding at all times the parties to each other and to the whole, express the permanence of the individuality in growth and morphogenesis. The rhythm of growth of a party may be different from that of the neighbouring party, but it is nonetheless regulated on Him and on that of the whole".

"The skeleton must be built rationally and be capable of bearing not only the loads due to the simple laws of gravity, but also the loads due to function.  At all times the shape of the bone is the  integral reproduction of the prevailing functional and mechanical equilibrium in that bone. Just as much as other building materials, bone obeys the same physical laws with the difference that the lines of force, the lines of reinforcement are drawn by themselves in the construction and shape of the bone.

In the same way, Delaire used to precise :
"the craniofacial skeletal complex can be considered as a puzzle, a "construction game", whose overall state depends on that of all the pieces and all the elements or units that constitute them in their mutual situations, dimensions, proportions, orientations".

This approach consists in considering the face as a construction (like a kind of building), of which the organism is the architect, and to study how this face is constructed. It means to study how the many differents sub units (pieces of the puzzle, parts of the building)  of the face do interact, considering the hereditary datas, the possibilities of  growth and  oro-facial functions of each individual. The face, as all the organism, is a whole, therefore, a defect, a problem, occuring at distance in one sub unit, can have consequences and effects in return ( through static/volumic  or dynamic/ contractile actions) at distance.  see (%) below

The cranio-facial skeleton is comparable to a "Building Set" (a Puzzle in plane view) which "constituent parts" correspond to as many "growth units".
The Development (the State) of each of them conditions the balance of the whole that they form (and conversely).

This fundamental Notion has been summarized by D'Arcy THOMPSON in these terms: “The form of any portion of matter whether it be living or dead and the change of forms which are apparent in its movements and in its growth, may in all case alike be discribed as due to the action of force".
In short, "the form of an object is a diagram of forces".
In other words, fhe "morphological" and "structural" states of the craniofacial skeleton are not only the "materialization" of the forces that exercise there. They also bbjectivise their changes during growth. The precise study of the skeletal forms and structures provides informations on both the state of the skeleton and the functions (normal or pathological) that ensure its development.

The Forces applied to the Cephalic Skeleton (responsible for Cephalic Morphogenesis) come from :
-the expansion of tissues and Viscera
-the muscular forces applied directly to the skeletal parts or transmitted to them by aponeurosis or ligaments  esp. in growth period).

The tissue expansions and the effects of muscular chains are essential to give the human cephalic skeleton its fundamental characteristics.
-counterclockwise occipito-temporal rotation
- basal-cranial flexion with shortening of the length of thebase of the skull (and depth of the face)
- clockwise facial rotation, with prominence of the nasal bridge, nasal spine, chin, malar bones
- verticalization of the face, with lowering of the osseous palate and  mandibular body

In dentofacial orthopaedics this assimilation allows a better vision of the diversity of facial constructions, a better understanding of the fundamental rules of cranio-facial balance and a better analysis of each dysmorphosis. Indeed, a dysmorphis in a certain place in the face can be due, caused or worsened  by a "problem" occuring at distance in the face, skull, cervical spinal ... or even further.

Let's get back to the classics : 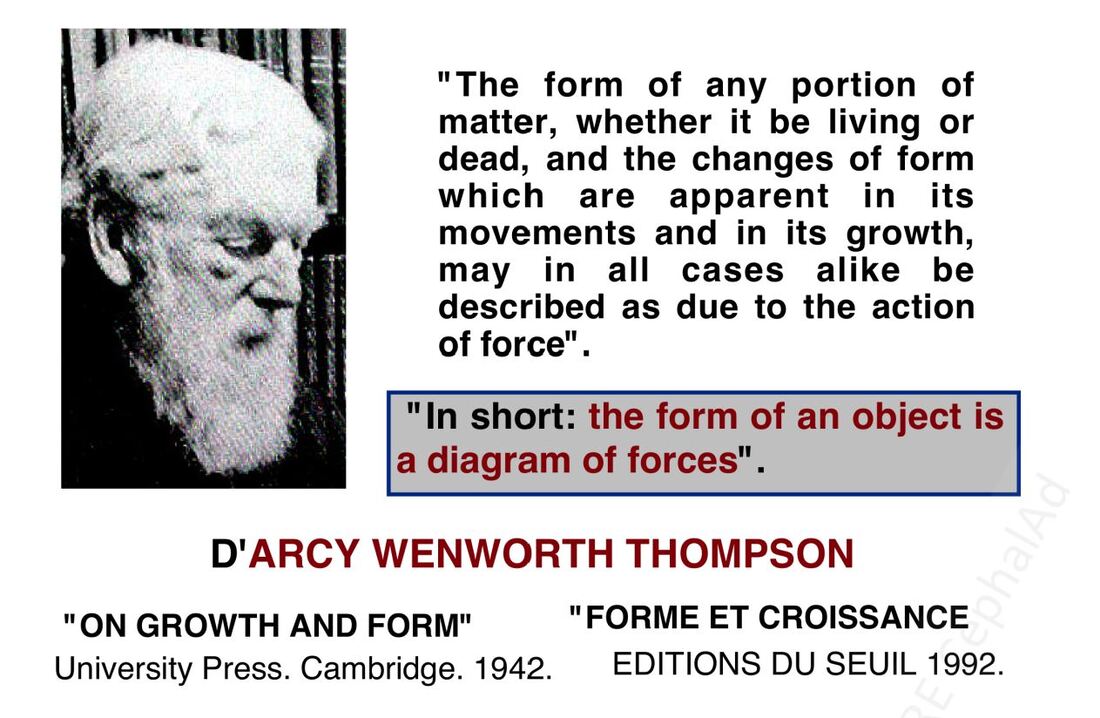 Considering :
- the face is a  puzzle of functionnal sub units,
- this puzzle can be considered as a mecanical construction obeying to the rules of physics, biology, geometry and thermo dynamics,
- Thomson's statement..
It become possible to consider modelizing the face and to present it in a diagram of forces revealing, symplifying, showing  the profund and complex mecanics of the face in a simple geometrical drawing. 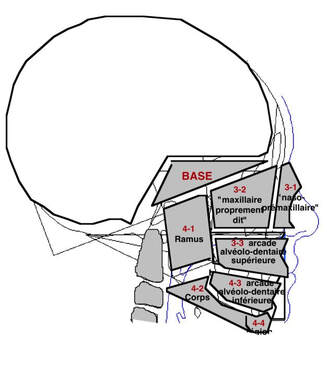 The many "Facial Parts", which we will see that they are delimited by the Lines of tht Craniofacial Architectural Analysis, correspond to the Main "Growth Units" of the Face.
The state of each of these facial pieces and the state of the whole that they form is as a result of :
- the forces they have been exposed to ( separately and as a whole) by the viscera and muscles that apply or are inserted on them.
- the reactions of the skeletal elements contained in them.
In  "normal" subjects they are all harmoniously developed and balanced.

"There is a similarity between the structure of an architectural construction and the structure of the facial system". "A building or a monument is made of architectural elements -shape, size and position- witch are coordinated according to rules of proportion to produce what we recognize as a state of normality. Seemingly, the facial system is based on characters of shape, size and position which are also coordinated in some way to reach the proportion that corresponds to its normal morphological state".
"The criteria used for carrying on a valuation exam in the face can be compared to those of architecture...."
E. MUZJ 1982
in : Musical and Architectural Proportions in the Anatomy of the Facial System An Anthropologic Approach". Angle Orthodontist. 1982 ; 52 : 177-210.


"The Skeleton must be built in a rational way and capable of supporting not only the loads due to the simple laws of gravity, but also the loads due to function. Just as with other building materials, bone obeys the same physical laws with this difference being that the lines of force, the lines of reinforcement are drawn by themselves in the construction and shape of the bone. Even the internal, microscopic structure of the bone responds to these data".
de COSTER (1950)

"All organized being forms a whole, a single and closed system which parts correspond to each other and contribute to the same ultimate action by reciprocal action.
None of these parts can change without the others changing as well. Therefore, each one of them taken separately indicates and gives all the others "
Cuvier


"The book of nature is written in mathematical language, the letters are triangles, spheres and other figures, without the help of which it's impossible to understand a single word."
Galileo GALILEI.

end of section.
Powered by