The Cephalometric Analyses known as "Conventional" are fundamentally based on Measurements of craniofacial segments selected "by Convention" and compared to standard statistical averages.

"Conventional cephalometry has no biological or biometric basis. It gives false information by making erroneous geometric values, camouflaging remodelling, confusing what really happens. It does not really represent growth. There are no cephalometric theories, only conventions"
(Moyers RE & BOOKSTEIN F 1979)

1) Non validity of the statistical standards
2) Inaccuracy of linear measurements considered as Increases,  but in fact being projections of the "displacements" of the reference points
3) Inadequate consideration of the particularities of the specific growth of the various elements of the cephalic skeleton

Non validity of the statistical standards
The error of considering STATISTICAL MEANS as BIOMETRIC STANDARDS was denounced by QUETELET (1796-1874) himself and creator of the term "Biometry" in Europe and father of this discipline.  When he assessed the size of young Belgians aged 18 to 20, he had in fact established that the size of young Belgians aged 18 to 20 was distributed equally (symmetrically) on either side of the "typical" average, forming a Regular Curve identical to that of GAUSS. Approximately 70 to 75% of the subjects were located in the median 1/3 of this one. The remaining 25 to 30% were equally distributed on both sides of this median zone.
Measurements taken on humans oscillate around an "average" value, the most frequent variations of which vary only slightly, the
rarers on the contrary much.

QUETELET insisted, on the other hand, on the great individual variations, depending notably on Heredity, Sex, Place and Lifestyle, with the Metric differences not implying significant differences in the health status of the subjects. In no case does "Statistical Average" mean "Better Health".

On this subjet, A. BRODIE said : "It is time that we ceased to compare each individual we treat with some pattern that has been arrived by the careful compilation and averaging of large series of measurements of different individuals. My entire plea is for an abandonment of the norm concept" in : Angle Orthod; Jullyy-Oct 1946 vol XVI nos 3-4.

According to DOWNS (1948) : " Although very different from the general statistical averages, the various facial angles and segments are perfectly normal if the variations of one are in agreement with those of the others".

Accordinf to BRUNNER, GAILLARD & DOUSSEAU (1971) : "Normal variations often prove to be more important than the pathological variations  resulting from the application of standards, however numerous they may be".

Many other Authors (CHAN, COOKE,COTTON, ENGEL, MIURA, MOORREES, THILANDER,SCHMUTH, WEI...) have shown, also, how much (in the absence of any pathology) the facial statistical means of some African and Asian Populations can be different, between them and compared to the Caucasian Populations.

Studies conducted by GRABER (1954) at Northwestern University found a large quantity of combinations of craniofacial constituents (Amerian journal of orthodontics JAN 1954.  A critical review of clinical cepahlometric radiography). We must consider that accepting statistical averages as the only goal of prognosis and treatment will make us  ignore the majority of the individuals.

Finally the "clinical applications of conventional cephalometric analysis based on statistical averages are only and partially showing the patient's position relative to the group average he/her belongs to, they should not be used to establish treatment goals".
HOROWITZ & HIXON (in M.F.MARCHAL et G.LEFEBVRE : "TECHNOLOGIE TELERADIOGRAPHIQUE" L'ORTHODONTIE FRANCAISE. 1982- Vol 53*, pp 191-210)

Basing oneself on Statistical Standards established from a sample of healthy subjects, to correct the anomalies of a subject suffering from facial dysmorphia  would be totally illogical and even, in the most severe cases, totally absurd. This is particularly evident in chromosomal diseases (e.g. Down syndrom), but it is valid too in other and even less obvious malformative syndromes which are also frequently observed in orthodontic practice.

Of course, this does not mean that all statistical averages are useless, but they must be chosen carefully,
- By keeping only those that have real physiological  value
- By considering standard deviations
- by applying "individual" corrections to them, by age, sex, population, type, age, sex, population, morphological type (familial, ethnic, etc...) of the subject

Inaccuracy of Linear Measurements on the lateral cephalograms, from a single system registration
Dimensions and increases in bone structure which are traditionally considered skeletal increase are, in fact, only the projections of the segments and  displacements  of  the considered landmarks ( and sometimes very different from the actual increases).
The lateral teleradiography corresponds to the projection, on the same plane R (see fig above), of all the medial and lateral structures of the face.
During its growth, the distances between the reference points only represent the projections of their movements. Therefore, displacements of the same size X,  of the peripheral points are projected in a very different way in Plan R  according to their situation.
The displacement (X) of A (midpoint) is fully reproduced,  that (X) of D (anterolateral point) is only partially reproduced and  that (X) of E (external point) is not at all.

The direction of the reference points' displacements and the correspondinganatomical increments are not identical, resulting in misinterpretations of the true directions of growth.
We must keep in mind that the osseous landmarks displacements are never linear and straight, but always curvilinear. Two geometrical loci move in a relatively rectilinear way :  the internal nasion and the basion. ( DELATTER and FENART).

So, linear measurements on profile radiographs are subject to many biases if these factors are not taken into account
Inadequate consideration of the particularities of the specific growth of the cephalic skeleton
Classical cephalometries do study the development of the face as if, the face and the base of the skull formed a single and same block.
They do not sufficiently take into account the direct correlations existing between the development of the face and that of the vault and base of the skull (see (%) (%%) below), and that of the spine (see %%%). They, therefore, cannot provide information about the nature and the origins of its anomalies.
Conventional cephalometric analyses study the development of the base of the skull and the face as a whole, as if they were growing only by their periphery. The Lines (segments) joining the exclusively peripheral landmarks leave in their center an unexplored "Facial Area", which is quite an issue for facial surgeons. The measurements of these segments can only  put in evidence  global facial increases. 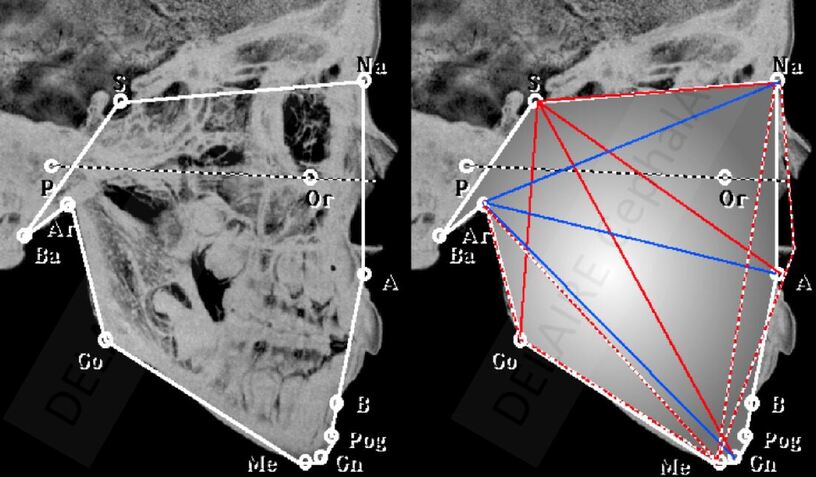 Facial area delimited by the peripheral points used in conventional analyses. Segments do join these points (along or across the facial area). Their measurement only highlights global developmental disorders
To specify the exact nature of facial anomalies ( to treat them ) it is necessary, not only to distinguish between alveolar and skeletal discrepencies, but also to analyse, separately and more completely, the state and development of the main areas of growth of the face.
And conventional analyses do not allow to precisely discribe the state of the face / skull / cervial spine

( aka : making a precise diagnosis for aimed treatment and follow up).


end of section.
Powered by