Lets get less criticable
and start getting to the point...

It has been seen that SNA SNB and other classical cephalometries elements do not correspond to a physiological "reality".  Let's see how to better define some normal anatomical relationships.

Delaire's base of the skull
It also has been seen that S is instable in time, beside being a soft tissue point used to represents bones.

The intersection of the lower part of the anterior clinoid process and the anterior margin of the sella is said  the most fixed part of the sella by A. BJÔRK &  B. MELSEN.
Instead of using SNA & SNB which have nothing to do with the maxilla & mandible to evaluate their positions and inter relationships, let's see this from a Delaire's point of view.

How to define/ modelize  the maxilla  and the mandible ?

Defining the base of the skull, the maxilla and the mandible, allows to precise their reciprocal relationships. Delaire uses a maxillar pillar and a mandibular pillar, which of course, normally shoul overlap. 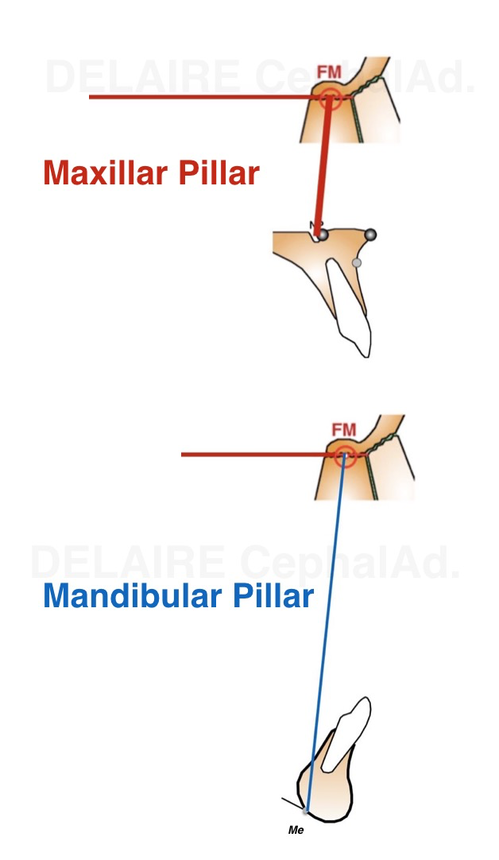 Maxillar pillar.
It is a line modelinzes the path of the occlusal forces which diffuse in the bone. It is drawn from FM, middle of the maxillo frontal suture to NP, anterior aspect of the naso palatine canal (ie the limit between the two maxillas).

Mandibular pillar.
Again, It is a line modelizing the path of the occlusal forces which diffuse in the bones and through the teeth. It goes from FM to Me.
The maxilla and the mandible can be correctly aligned :

The angulation between F1 anterio pillar of the face, and Delaire's base of the skull C1 is normally : 90° in male, 85 in female and kids, reflecting the mote projected (transfrontal) profiles upon sex and age.  The delaire approach individualizes the plot by adding or subtracting a correction factor to this normal angle. This corrective factor is calculated according to different values measured on the skull and describing its overall shape. Indeed, the skull can have a shorter base, and be globally higher, predisposing to a class 3, or inversely, be longer but less high and predisposing to a class 2, this being partly related to the position of the TMJ induced by these cranial conformations.
This pillar will determinate and personalize all the Delaire's cephalometric analysis making it a personnalized tool which  will adapt itself to respect the particularities of the growth of the subjects according to the sex.

All these elements comparing the actual anatomy of the patient to  an ideal  state/ architecture
allow to go further in our process....
end of section
Powered by